A secret has been explained by In SGGSji in this Shabad by Guru Arjan Dev ji. This is secret is the essence about our origin and a way of living our life in this world. This is an empowerment to transform our life from being afflicted by disease and painful experiences to a healthy and happy living.
Let us first look at the Shabad and its translation and then attempt an understanding in depth. 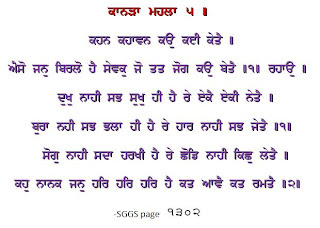 KAANRAA, FIFTH MEHL:
Many speak and talk about way to God.
But such a humble servant is very rare who understands the essence of Yoga 1 Pause
There is no pain, only peace; Just see the oneness.
Nothing is bad - all is good, there is no defeat, only victory in the end. 1
There is no sorrow, only happiness; but he does not give this up.
Says Nanak, the humble servant of the Lord is himself the Lord; who then has come and who is present along with. 2

Here Guru Sahebji has given us the following understandings:

1) There is no difference between the Lord and us.
2) There is oneness and only HIM.
3) HE is both the creator and the creation.
4) Essence is to practice this oneness.
5) Pain, sorrow and defeat are only illusions and not reality.
6) HE is peace and anand.

This Shabad also guides us as to how we are to transform our life and be in peace and happiness. A small incident in my life, which occurred 10 years back, might illustrate the method. At that time I was reading books by Bhai Saheb Raghubir Singh Bir who had profound understanding of Gurbani and had achieved higher states of oneness. Bir Sahebji explained that the diseases are only illusions and we should not consider them as actual reality. I then had a chance to practice this yoga in actuality during trip to Sahebji.

Hemkunt Saheb Gurudwara is situated at about 15000 m in the Himalayas. While starting the walk back, the knee of my left leg started to pain. What to do then. At that time I simply ignored the existence of pain. Mentally, stated it to be an illusion and considered my knee to be fine. And it became fine. This small event opened before me a way that I have used on many occasions to free myself of small ailments. Although I have experimented with several other mind-body methods, as well.

Gurbani guides us well in this Shabad.
When faced with disease consider it to be an illusion as is the world around. The reality is that you are Jyote Swaroop. Accept that Jyote is healthy and so are you.
Face with worldly problems, consider these to be illusions and accept them as such.
View it as resolved. See the solution being forming. Soon all will be well.

This is a practice contrary to what we usually do. When there is a problem, we anticipate further complications. Our efforts towards analysis of the problem, further complicates it. We instead have to look at solution and not how this solution will come about. Who are we to guide the universe as to how to bring about a solution? As Jyote Swaroop we just ask the universe for the end result.

I once heard a sakhi being told by a Ragi Singh. As yet I have not come across the source of this sakhi, but it is very illustrative.
Guru Gobind Singhji , the 10th Guru once was in a place which was dry and had no vegetation. People living around were having a hard living. Guruji looked around and uttered words which meant - “There is so much greenery around.”
An accompanying Singh countered it by saying “I don’t see any greenery, it is all dry.”
Guruji looked at him and again repeated their words. The countered it again. When this occurred third time the Guruji told the Singh that his words would have about the greenery as stated but your words will not bring the result.

In this world, we reap what we sow.
We reap with our thoughts, words, visualizations, beliefs and actions.
So practice and be your origin, Jyote Swaroop.
BE positive, BE confident.Be in oneness.
Posted by gurmit singh at 11:52 AM 1 comment:

Jap Meditation Revealed available on Amazon as ebook and paperback

Anhad Shabad : The celestial sound within
The Miraculous Power of Ardas (Part I)
Miracle of Ardas (prayer) --Part II
Better Your Daily Life Through Simran **
Beginning Simran **
Simran Healing: Cure for Root Cause of Cancer

Simran is a simple to do method of meditative remembrance of GOD . Simran lets you experience your divine origin - what you already are. The message of Guru for humanity is to do simran and live life by being spirtually alive in this world in health and prosperity. Simran is easy to do and immediately it starts to bring about natural state of peace and joy. First benefit of simran is health improvement. Simran is done by repeating with feeling of HIS Presence the name of God "WAHEGURU" a gurumantra or hymns from SGGS or a line from SGGS.

Some basic understandings from Shree Guru Granth Sahib ji are : Understanding 1: We are Jyout Swaroop (are of divine origin). We experience seprateness because of Ego. Understanding 2: The world is a creation of consciousness. (There is Oneness) Understanding 3: The nature of the created world is a mind pattern. Understanding 4: As are your thoughts so is your state of mind and accordingly are events/circumstances in your life. Understanding 5: Our mind is influenced by the five passions : kama (desire), krodh (anger), lobh (greed), moh (attachment) , Ahankar (pride) .These are the actual cause of diseases in our body. The first benefit of simran is cure of physical ailments. Understanding 6: Simran is the path towards knowing yourself as of Divine Origin .Simran pulls you gently inward and places conscious awareness inside .You start living in harmony with nature connected inside with the creative force - the source and essence.The health,abundance and prosperity is then your natural state automatically.