Through Shabad live in Naam.

While reading Shri Guru Granth Saheb ji among the words those comes frequently are ‘Naam’ and ‘Shabad’. These are also the words that have deep meaning and needs to be given much thought.
Guru Sahebji says that :

Through the Guru's Teachings, illumination (knowledge) is received.
And through the Shabad, is received the Lord as Naam.
- SGGS 30

The gurbani in the words of Guruji is ‘Braham Vichar’ – it expounds and presents spiritual knowledge. The gurbani meanings also change as per stage of the devotee who then begins to perceive subtle meanings and explanations about the subtle spiritual realm. The same words which earlier had been read in a go suddenly begin to hold the attention.

Let us now look at the word ‘Shabad ‘which is commonly thought to mean a hymn or sections of SGGSji. The shabad is sung as kirtan. We listen to Guru’s shabad in kirtan. But the word shabad has a different meaning also. Let us try to the subtle hints in SGGSji.

O mind, swim across,
by focusing your consciousness on the Shabad.
- SGGS 19

Here we are being asked to focus conscious attention on the shabad. And this is what the focus does to the mind.

The Shabad of the True one fascinates the mind;
And then God Himself arranges the meeting.
- SGGS 35

What is the secret of this ‘shabad’ that Guru ji which makes possible the merger a devotee yearns for. Here is another explanation from SGGSji.

As Gurmukh we understand that Bani (Guru’s word) is Braham;
through shabad we meet HIM.
- SGGS 39
Braham is the unchanging reality which is the aspect of oneness that is all matter, energy, time, space, beings and everything even beyond in this universe.

We as Sikhs are well aware of Anhad Shabad being a shabad (celestial sound) which is heard at the tenth gate and about hearing of which Guru Amardas ji has uttered the Bani ‘ Anand Sahib’. He exhorts us to hear the shabad. This hearing of the shabad and effort to keep focus on the "heard shabad" is the essence of Surt Shabad meeting.

Liberation is when the Guru unties the bonds; and the honor is obtained by focusing conscious awareness on the Shabad,
- SGGS 1255
Shabad in physical form is the Guru’s bani and shabad is also within us. A sikh who does regular simran within hears shabad inside coming from the area of tenth gate. This celestial sound some say is like a HUMMMM sound and even is compared with night sounds of insects. At the gross level where our surt is generally the sound is heard as such by our inner ears.
As we keep our Surt focused on the shabad we gradually begin to get absorbed it in. On further progress this celestial sound heard is very pleasant. This sound is Anahat meaning that which is formed without any object striking another. Gurbani therefore calls it Anhad Shabad. This shabad has quality of light also and this is why many a devotee sees celestial light as well. The shabad is the one that pulls the Surt through the tenth gate known as Dasam Dwar. Here is how Guruji describes the importance of Shabad.

Shabad is guru in the physical form of SGGSji. On reading the shabad’s we get gyan and through recitation and kirtan our consciousness is lifted and we become more ‘sato guni’. We then move more inward and hear the shabad guru. Shabad is an aspect of Karta . Shabad as guru gives us intuitive understanding of spiritual realms and also guidance relevant to the physical life. As the physical guru liberates us so does the Shabad Guru.

Through the Shabad Guru, one crosses over this world-ocean.
The duality (separation belief) within is burnt within.
The five celestial sounds ( panch shabads) being the arrow and the drawn bow is aimed at the Tenth Gate in the Sky within, the death is beaten.
The faithless cynics cannot attain enlightened awareness of the Shabad. Without awareness of the Shabad, they come and go in reincarnation.
- SGGS 1042

The panch sounds referred in the above hymn are the five elements: Earth, Water, Fire, Air and the Sky. These five have been created by the celestial shabad.
Gurbani explains that the ‘Nirankar’ has taken first as formless ‘Ekongkar’ (the oneness in the universe).This oneness is our origin and from the ‘Ekongkar’ has emanated ‘Braham’ swaroop. The Braham is also shabad roop. The shabad has given rise to the five elements and the material form in the universe. If we consider the scientific view then the quantum physics is very near here, as it tells everything is vibration.

A question that comes in mind is that as to where the shabad is coming from. Guruji has given a hint in these lines from SGGSji.

The sweet, melodious, unstruck sound current vibrates continuously
in the home of the Nirbhau.
-SGGS 1033

Guru ji has explained in the mool mantar that the Ekongkar is also Nirbhau. When Guruji talks about Nirbhau the word is used as an explanation in the sense that we can understand and relate to. The world we live in a world of duality. It is a world of relationship. The opposites exist so that the other is defined and experienced. We can understand love if fear is there. We can understand big if small is there. We can also understand Cold only if Hot is there. Look around and this relationship is seen around in all existence whether material or abstract. So also we have been created to live as if separate, in order that HE is experienced. Our houme (ego) ensures we feel and live as a distinct separate being. When this veil is lifted there is only HE.

Nirbhau can be translated to mean ‘fearless’. HE is SAT meaning truth .Here the meaning is that HE is not a creation like this created world which is ever changes but is same SAT ever. It is only in the created world that fear exists. The SAT swaroop is only love and anand. Fear does not exist in SAT swaroop. IT is from this SAT swaroop Ekongkar that home of Nirbhau that the shabad is originating. Guru ji has also explained in these lines :

Creation and destruction happen through the Shabad.
Through the Shabad, creation happens again.
--SGGS 117
This shabad has given rise to material world and this shabad is also the “thought energy” in our mind that makes possible thinking. This shabad also takes the form of words and language like everything else in the universe.

Here is an illustration to explain shabad : 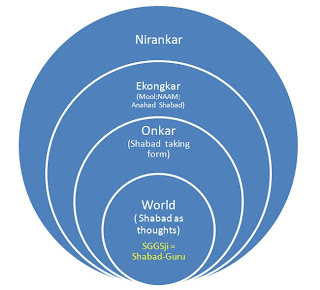 Next is the question of relationship between Shabad and Naam.

Naam is our origin.

Naam is received truly when we reach and become OUR ORIGIN instead of living with a feeling of being separate. We have Naam when we live as jyote swaroop.
This line from SGGSji clarifies much.

The form of Naam in the material world is the Name of the Lord or God. Gurbani HE has many names. It is immaterial to call him by any name exclusively as any name would be only limited and cannot connect fully with the limitless. The knowledge of Naam can only be obtained from Guru.

Through the Shabad Naam blossoms within and through shabad we embrace the Naam;
Without the (awareness of) Shabad, the whole world lives as insane, and the earth life is lost in vain. The Shabad alone is Ambrosial Nectar; Says Nanak, as Gurmukh obtain it.
- SGGSji 644

We use names of God for the purpose of jap and simran. We use name as ‘Guru Mantra’ also.
When the purpose of a name a form of Naam in the physical world is served by arranging a meeting with Sat Saroop within there is no need for any name. Then we have Naam – our origin.
We see him existing every where and in everything.

Jap Meditation Revealed available on Amazon as ebook and paperback

Anhad Shabad : The celestial sound within
The Miraculous Power of Ardas (Part I)
Miracle of Ardas (prayer) --Part II
Better Your Daily Life Through Simran **
Beginning Simran **
Simran Healing: Cure for Root Cause of Cancer

Simran is a simple to do method of meditative remembrance of GOD . Simran lets you experience your divine origin - what you already are. The message of Guru for humanity is to do simran and live life by being spirtually alive in this world in health and prosperity. Simran is easy to do and immediately it starts to bring about natural state of peace and joy. First benefit of simran is health improvement. Simran is done by repeating with feeling of HIS Presence the name of God "WAHEGURU" a gurumantra or hymns from SGGS or a line from SGGS.

Some basic understandings from Shree Guru Granth Sahib ji are : Understanding 1: We are Jyout Swaroop (are of divine origin). We experience seprateness because of Ego. Understanding 2: The world is a creation of consciousness. (There is Oneness) Understanding 3: The nature of the created world is a mind pattern. Understanding 4: As are your thoughts so is your state of mind and accordingly are events/circumstances in your life. Understanding 5: Our mind is influenced by the five passions : kama (desire), krodh (anger), lobh (greed), moh (attachment) , Ahankar (pride) .These are the actual cause of diseases in our body. The first benefit of simran is cure of physical ailments. Understanding 6: Simran is the path towards knowing yourself as of Divine Origin .Simran pulls you gently inward and places conscious awareness inside .You start living in harmony with nature connected inside with the creative force - the source and essence.The health,abundance and prosperity is then your natural state automatically.